All Life began in the ocean.The tides, the salt, the rolling waves are in our souls.The sea will always have the power to call us home.

There is a world deep under the sea, a kingdom that has endured thousands of years without the modern world knowing it exists. Those who dwell there are Thalassogenêis: SEABORN

Kassandra is the Seaborn king's granddaughter--the one he wishes he'd killed when he'd had the chance. She comes from the sea, but she has spent her whole life in exile on the surface, learning to control strange and frightening powers she barely understands. But now she's ready to declare war on the murderous king.

Corina Lairsey is a scuba-diving Californian who has freed herself from a controlling relationship...and finds herself in another. Only this time, Aleximor, an ancient Seaborn sorcerer, is literally inside her head and wearing her body. Corina must strive for control of her self, fighting against time as Aleximor trades pieces of her life away in exchange for power over the path between the worlds of the living and the dead.

Aleximor wants revenge for his 400-year imprisonment and his dangerous machinations threaten to destroy both young women and the world of the Seaborn.

Buy it in eBook now at Fictionwise

Seaborn is one of those books that after I finished reading it, I still want more. Chris's dubut has your imagination on overdrive. Seaborn is filled with action, suspense,devotion and a bit of horror.

The main characters are memorable.Kassandra comes off as untouchable,physically and mentally. I was a bit scared of her at first, until I saw where her loyalties lied. I think of her as an underwater amazon warrior.

Aleximor is a passionate and scary character. He's one of those people you like but a part of you knows you shouldn't.

Corina has a strong will . Even though Aleximor has taken over her body,she plays a big role throughout the book. I wanted to fight with her.

Seaborn takes the reader on a non-stop above and below the sea adventure.It follows many different story lines that come together at all the right times. The fast-paced chapters will have you up all night not wanting to miss what is going happen next. You'll go from reading Aleximor/Corina's journey from the Pacific to the Atlantic to reading Kassandra's internal and external battles toward becoming the warrior and leader she is meant to be. Chris's details in this debut are remarkable. I was amazed at the gory detail of how Aleximor recruits his army of the dead and reading what it takes for a surfacer to become Seaborn. You won't want to put this book down.
Posted by danetteb at 12:34 AM

Thank you, Danette! Wow, what a wonderful review!

Thank you,it is an awesome read. I'm glad there is more of the Seaborn to come :)

I am looking forward to reading this. It has been on my wishlist for a few months...I wonder if it is out here in Europe yet.

Amazon(U.S.) is selling Seaborn,you might want to try the UK Amazon site. I haven't seen it on the store shelves yet.
Chris's blog said he'll be holding a contest when the book does release.
Hugs, Danette

Corina must strive for control of her self, fighting against time as Aleximor trades pieces of her life away in exchange for power over the path between the worlds of the living and the dead. 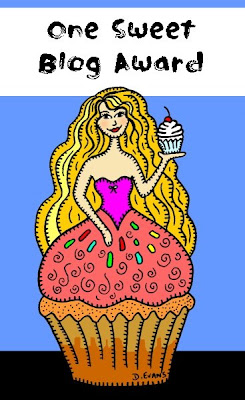 Thank you Cathy for a
Heartfelt Award!

danetteb
I'm a stay at home mom. I enjoy going out to the beach, reading and talking about a good book .

View my complete profile
E-mail me